India’s strategic partnerships with number of technologically advanced countries could be put to test for acquiring newer technology. 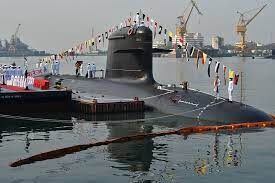 On April 20, 2022, the sixth and the last of SCORPENE submarines was launched by Defence Secretary Dr Ajay Kumar at Mumbai. This brings to end the Project 75 contract with Mazgaon Docks Limited.

The submarine has to undergo setting to work of various equipment followed by harbor trials. The Naval crew will take her to sea for rigorous sea trials before it is officially handed over to the Navy by late 2023. The submarine carries the name Vagsheer and is reincarnation of an earlier submarine. In the Navy, ships and submarines get re-christened after their earlier versions have been decommissioned. These six submarines were built by MDL under ToT from Naval Group of France in a contract of $3.75 bn.

The Navy has a 30-year submarine building programme which entails designing and building submarines indigenously. The entire programme is many years behind the envisaged schedule. Harnessing an indigenous design has remained an unachieved target for the Navy. There were opportunities to develop upon the SSKs 209 ( German Design HDW) as also on Kilo class whose Medium Refit Life Certification was done by our yards. Even at this stage hunt for Project 75(I) is in progress. It will be built under Strategic Partnership Model for which MDL and L&T shipyards have been shortlisted. Four original manufacturers are in the fray. It can be safely expected that commencement is few years away. What happens in the interim when MDL building line is without work? The expertise obtained in building Scorpene could get lost by the time a submarine of 75(I) begins production.

Considering the situation that India is in, both geo-political and technological, few options are worth examination. We are short on submarines is a reality. A 30-year submarine building programme has become a history because we haven’t got an indigenous design yet. Project 75(I) AoN was obtained in 2011/12. During the discussions an alternate proposal was suggested to increase the number of diesel submarines under Project 75 from 6 to 9 and future investments be made to construct 6 SSNs( Nuclear powered but not nuclear armed attack submarines). Instead option of mid life upgrade of Kilo Class and building 75(I) submarine was chosen. Government could not have afforded funding mid life upgrade of Kilo class and building submarines under Project 75(I) simultaneously. Therefore, in 2022 we are at the same situation due to Scorpene having been built and yard left without work on submarine building line and 75(I) not in close vicinity.

Few alternatives could be considered subject to acceptance by the Navy and backing of the Ministry Of Defence ( DoD). MDL could be contracted to build another three Scorpene submarines. In the meanwhile indigenous AIP ( Air Independent Propulsion) could be retrofitted onto the six submarines already built and three new Scorpenes could be constructed with AIP. This would keep the MDL line going and trained manpower gainfully employed. New set of technicians could be trained by the existing skilled workers.

As far as Project 75(I) is concerned, it could be converted to SSN construction for which G to G agreement should be explored expeditiously. Selected submarine could be built jointly by the shortlisted shipyards, L&T and MDL. The time is also ripe to obtain technology for miniaturized nuclear reactors for SSNs keeping abreast the present times. SSNs can cover much larger area and conduct stealth reconnaissance in the IOR ( and possibly Indo Pacific) in lesser duration. Therefore, lesser number of submarines may be deployed leaving diesel submarines for near coast deployments. Collusion of China and Pakistan is resulting in Pakistan getting 8 submarines from China( 3 to be built in Karachi Shipyard). The induction has already begun. In addition 3/4 Frigates/ destroyers will result in Pakistan having a different Navy and be proxy to PLAN. It is time to be prepared for emerging scenarios.

India’s strategic partnerships with number of technologically advanced countries could be put to test for acquiring this newer technology.